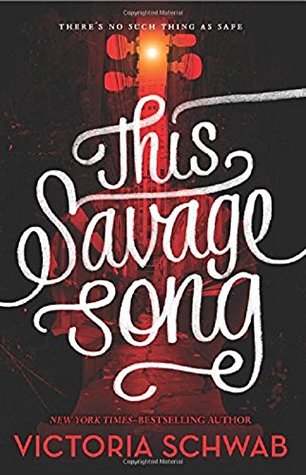 There’s no such thing as safe in a city at war, a city overrun with monsters. In this dark urban fantasy from acclaimed author Victoria Schwab, a young woman and a young man must choose whether to become heroes or villains—and friends or enemies—with the future of their home at stake. The first of two books, This Savage Song is a must-have for fans of Holly Black, Maggie Stiefvater, and Laini Taylor.

Kate Harker and August Flynn are the heirs to a divided city—a city where the violence has begun to breed actual monsters. All Kate wants is to be as ruthless as her father, who lets the monsters roam free and makes the humans pay for his protection. All August wants is to be human, as good-hearted as his own father, to play a bigger role in protecting the innocent—but he’s one of the monsters. One who can steal a soul with a simple strain of music. When the chance arises to keep an eye on Kate, who’s just been kicked out of her sixth boarding school and returned home, August jumps at it. But Kate discovers August’s secret, and after a failed assassinationattempt the pair must flee for their lives.

This Savage Song has been on my TBR since forever. The first Victoria Schwab book I bought. I was so thrilled when reading what the story was about. It felt different than most stories.

It’s official. Victoria Schwab has climbed my list of favorite authors. I only ever read City of Ghosts and this one, but her stories and writing styles are amazing. I already ordered A Darker Shade of Magic so I think it’s obvious that I’m sold.

Kate Harker: I felt a tiny bit confused when the story started, but once I got into it a little more everything played out nicely. When Kate was introduced I had a feeling I was going to really like her. And I did. I liked putting together the pieces of her life. I liked getting to know her, and getting to see her insecurities and her attitude in handling them. She aspired to be just as cruel as her father and to prove that she could handle it. That made her actions so much more interesting to understand.

“She cracked a smile. “So what’s your poison?”
He sighed dramatically, and let the truth tumble off his tongue. “Life.”
“Ah,” she said ruefully. “That’ll kill you.”

August Flynn: A monster who longs to be human. A monster who isn’t a monster at all. August I LOVED. I loved him a whole lot. He was innocent and just wanted to prove his ability to be a part of the FTF like his parents and brother. He was given something different than what he was hoping for, but he still did his best. He was just so precious and I found myself wanting to protect him at all times.

“I am not a…”
But his throat closed up. The words got stuck.
I am not a monster, that’s what he wanted to say, but he couldn’t. He hadn’t found a way to make it true.”

The story was fast paced. I didn’t feel bored for even a minute. I loved where the story was going and I loved how every moment built towards it. I adored the fact that there was no romance in this one. Kate and August had a simple platonic relationship and It was everything. Such an original story line and lovable characters  and I can’t wait to read Our Dark Duet next!

What did you think about This Savage Song? Which book by Victoria Schwab is your favorite?