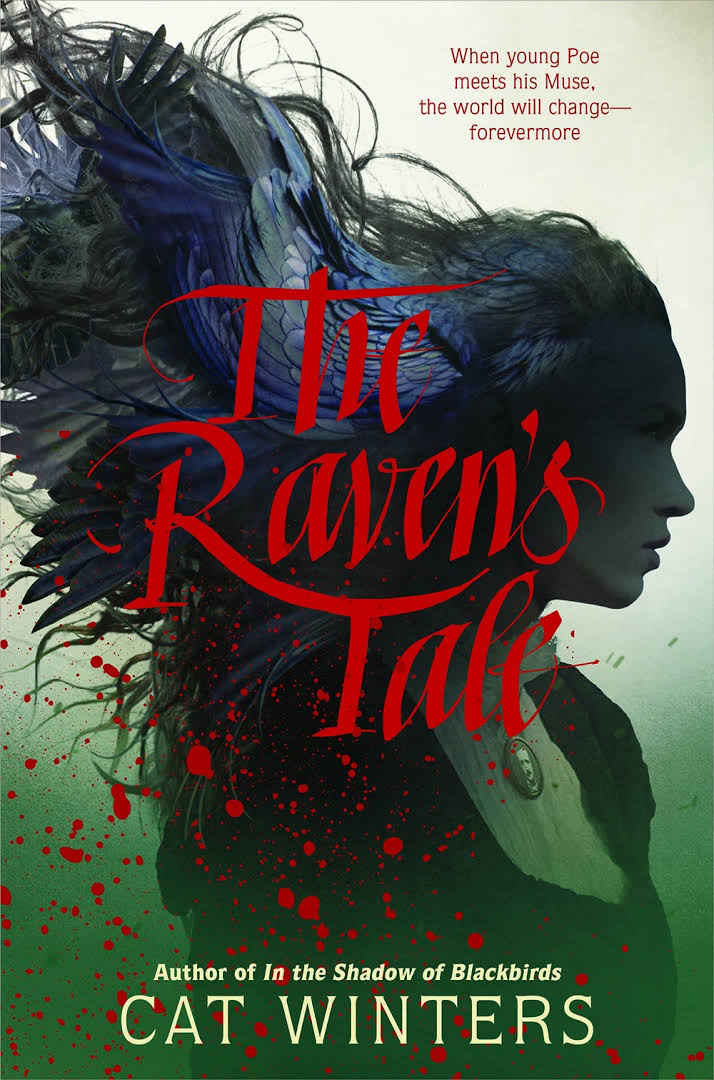 Seventeen-year-old Edgar Poe counts down the days until he can escape his foster family—the wealthy Allans of Richmond, Virginia. He hungers for his upcoming life as a student at the prestigious new university, almost as much as he longs to marry his beloved Elmira Royster. However, on the brink of his departure, all his plans go awry when a macabre Muse named Lenore appears to him. Muses are frightful creatures that lead Artists down a path of ruin and disgrace, and no respectable person could possibly understand or accept them. But Lenore steps out of the shadows with one request: “Let them see me!”

Thank you Amulet Books for the free (gifted) review copy in exchange for an honest review!

Cat Winters weaves together a creative and melancholy story in this Edgar Allan Poe retelling.

The Raven’s Tale takes us on a journey following Edgar Allan Poe. Edgar struggles between writing his poetry and putting up with all the pressure that he receives from his father. Edgar’s writing soon turns into a muse named Lenore. A muse that is frowned upon by the inhabitants of Richmond.

If you’re a fan of Edgar Allan Poe’s work than you will definitely appreciate this retelling. Edgar has a lot to put up with in this story from following his dreams of becoming a poet, to sticking to his father’s demands. A story where Edgar has to either hold onto his muse or to banish her completely along with his poetry. This story is filled with beautiful pieces of poetry as well as some pretty macabre stories of Edgar’s making.

“The kindest thing you can do for the dead,” says the young man who requested the kiss, “is to weave their names into art.”

The language and writing style that Cat Winters uses is amazing and very fitting for the setting of the book and events. Although there were some parts that felt a bit slow, the writing was easy to follow and was entertaining most of the time. The story is also told from both Edgar and Lenore’s points of view, but this retelling is to honor Edgar Allan Poe as stated by the author. Cat Winters truly put in so much love when writing this story and I found myself loving every second of it.

The story is whimsical and gothic all at once, and you could see the difference between the world from Edgar and Lenore’s eyes. The prose is breathtaking and seeing Edgar Allan Poe’s poetry written and weaved through the story was perfect. Cat Winters included Poe’s deepest fears as well as a look into his love for writing deep and dark stories. I would definitely recommend this book to fans of dark fantasy and historical fiction.

Cat Winters is an award-winning, critically acclaimed author of fiction that blends history with the supernatural. Her young adult works include IN THE SHADOW OF BLACKBIRDS, THE CURE FOR DREAMING, THE STEEP AND THORNY WAY, ODD & TRUE, and a forthcoming novel about Edgar Allan Poe’s teen years, THE RAVEN’S TALE (available April 16, 2019). She is also the author of two adult novels, THE UNINVITED and YESTERNIGHT. She has been named a Morris Award finalist, a Bram Stoker Award nominee, and an Oregon Spirit Book Award winner, and her books have appeared on numerous state and “best of” lists.

Will you be reading The Raven’s Tale?

4 thoughts on “ARC Review: The Raven’s Tale by Cat Winters”