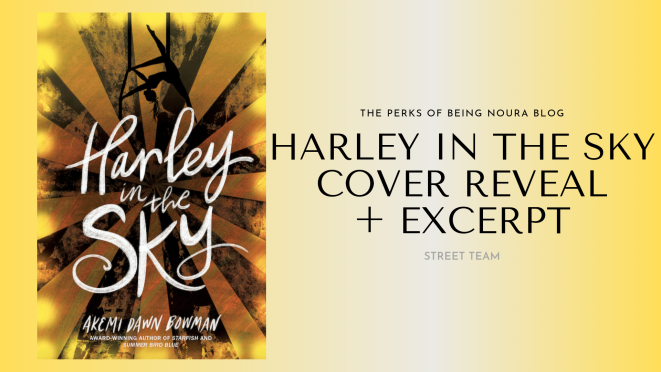 I was super thrilled to be accepted to the street team for her upcoming book, Harley In the sky releasing March 10th 2020 and published by Simon Pulse! 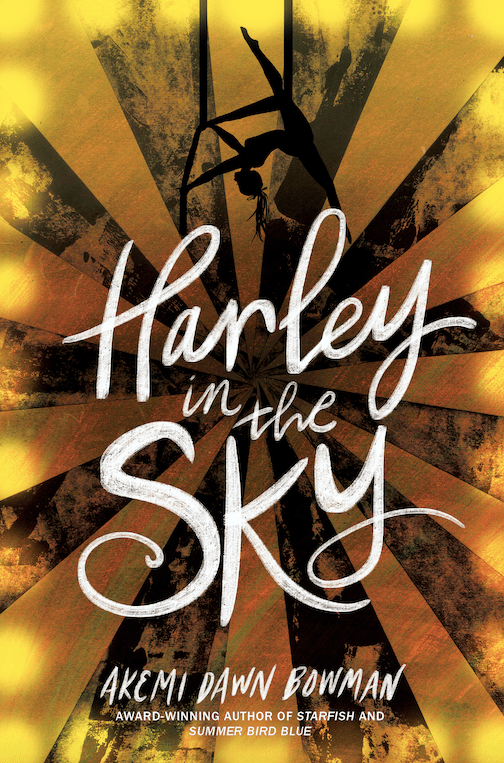 Tadaa! I fell in love with the cover when Akemi first shared it, and I can’t wait to start reading the book! And here’s a little synopsis for you:

Harley Milano has dreamed of being a trapeze artist for as long as she can remember. With parents who run a famous circus in Las Vegas, she spends almost every night in the big top watching their lead aerialist perform, wishing with all her soul that she could be up there herself one day.

After a huge fight with her parents, who continue to insist she go to school instead, Harley leaves home, betrays her family and joins the rival traveling circus Maison du Mystère. There, she is thrust into a world that is both brutal and beautiful, where she learns the value of hard work, passion and collaboration. But at the same time, Harley must come to terms with the truth of her family and her past—and reckon with the sacrifices she made and the people she hurt in order to follow her dreams.

Not many buildings can rival the bright lights and vibrant colors of the Strip at night, but the big top of Teatro della Notte certainly holds its own.

The black-and-gold-striped building is blanketed by an explosion of twinkling white lights. Built to look like a vintage carnival tent that practically bursts with nostalgia, the structure is impossible to miss—even against a backdrop of Las Vegas casino hotels.

A circus is an attraction, after all. And Teatro della Notte attracts.

I slip through the overflowing parking lot and keep my fists tight around the strap of my bag like I’m trying to contain my excitement. I can hear “The Minuet of Ghouls” playing from inside—the arpeggio of a violin, the trill of an oboe—and my heart beats a little faster when I realize how close I am to missing the final performance.

I’ve probably seen the show more often than anyone on the planet—I know the music, and the routines, and the truth behind the magic—but it hasn’t changed the way I feel.

I love the circus. I love the mystery, and the wonder, and the way every act transports my soul into another dimension. I love the way it makes me feel as if the world is in reverse and upside down all at once—like there’s starlight beneath my feet and the ocean above my head, and every impossible dream can come true with a single whisper.

Mom says I have a romantic view of the world, and maybe I do. But I don’t know how anybody could watch an acrobat dance across a tightrope or twist into the most perfect contortions or swing from the ceiling like a bird ready to fly and not find it utterly beautiful.

A pair of spotlights flash across the entrance like they’re pointing the way, but I hurry to the back of the building and make my way down a set of stairs. I knock on the door rapidly, bouncing on my heels because the tension inside me needs somewhere to go, and my second favorite doorman appears.

Second favorite because he once told my parents I was watching the show when I’d promised them I’d stay home to study. Even though he swore he hadn’t meant to get me in trouble, I haven’t entirely forgiven him for it yet.

“Har-leeey,” he says, dragging out the last syllable like a college dude-bro. Something else I’m not sure I can forgive him for.

“Hey, Billy,” I say with raised eyebrows. “Is it okay if I catch the last performance?”

“Of course.” He swings the door open so I can squeeze past him. He’s dressed in black from head to toe, which is a stark contrast to the glitter bombs and feathered ensembles of the performers. “Cutting it close tonight, huh?”

I let out an exasperated breath. “Mom sent me all the way to Summerlin to pick up Janie’s costume because her cat ate a bunch of the beads. She needs it fixed for tomorrow.” I peer up the nearby stairwell and point. “Is anyone in the skyrise?”

“It’s all yours,” Billy says with a chuckle, and suddenly I’m racing up the steps two at a time, very aware that the contortionist act is coming to a close.

I hurry across a metal walkway that circles around the height of the big top. We call it “the skyrise,” but it’s mostly used by the theater techs to adjust wires and lighting, and for the occasional photographer to get a good close-up photo of the aerial acts.

It’s also my favorite place to watch Tatya’s final performance, because when I’m this high, I don’t feel like a spectator. I feel like it could be me out there, sitting on the static trapeze, performing to the music my father composed—the extra layer of magic that breathes life into every act.

Traditionally, the trapeze has always been the closing act of the circus, and I couldn’t imagine anyone but Tatya closing out the show.

Except maybe me. One day.

An artist performing on a trapeze—the strength, and the movements, and the story, and the sparkle—it’s the very heart of the circus.

I want to be that heart.

I reach one of the many transparent windows in the darkest part of the hall and look down toward the center of the ring. Teatro della Notte boasts an incredible moving stage, surrounded by an impressive collection of dining tables circling around the room like a spiral. Each is decorated in black cloth and its own unique centerpiece representing the seasonal theme of the show; the tables flourish with guests, wineglasses, and confetti from the juggling act that appears during dessert.

Teatro della Notte combines a unique circus performance with a fine dining experience, and most of the guests turn up in suits and gowns. It’s the warmth of a vintage postcard combined with the decadence of 1920s glamour, with all the twists and turns of my parents’ imaginations.

I smile like I’m a child seeing the circus for the very first time.

Lights flicker all around the ceiling like an enchantment of stars, and I watch Tatya make her way to the center of the ring. She does a piqué turn and moves her arms through the air with the grace of a dancer.

I look at the faces in the crowd, lit up by the lights of the stage. They’re already enamored by her, and she hasn’t even started yet.

Tatya takes a seat on the static trapeze and flashes a wide smile toward the audience.

Dad’s beloved “Bird of the Night” begins to play from the live wind orchestra showcased at the back of the room. Each musician is dressed like they’re part of a haunted masquerade, and when the music erupts from their instruments, I picture my dad in his office, humming to himself and striking at the air like he’s conducting an orchestra of ghosts.

Even though sometimes it feels like he’s a ghost too.

Tatya grips the ropes as the trapeze lifts higher, and suddenly we’re at eye level, though she’d never be able to see me through the one-way glass. Besides, Tatya is never distracted when she performs. She’s too busy existing in another world.

A world I desperately wish I were a part of.

She pulls herself up, tucking both feet around the ropes and stretching her legs out in perfect form. With every shift of her body, she holds each pose, keeping in time with the music like it’s nothing more than a dance.

I know the moves—the monkey roll to sit, the mermaid on the bar, the lamppost, the drop to half angel. I know them because I rehearse every pose in my head while I count the days until the next time I can spend an afternoon at Teatro della Notte’s backstage gym. Usually there’s time when my parents are too busy counting numbers and going over expenses for a business they seem determined to suck the magic out of.

When they aren’t paying attention, I feel like I can be myself.

When I’m on the trapeze, I feel whole.

When I’m in the air with the ropes between my fingers, I feel like I’m everything I ever want to be in the world.

Tatya does a barrel roll over the bar, and I hear clapping when her body stills into a perfect horizontal split. The silver gems on her costume flicker like she’s covered in glass, and there are so many white feathers exploding from her skirt and braided hair that she really does look like an ethereal bird lost in a graveyard, ready to take flight.

It’s funny to think she had the same dream as me when she was my age—because look at her. She’s out there, living in the very same clouds a thousand people probably told her weren’t even real.

Tatya does a plank in the rope, and I can see the joy erupting from the crowd below.

This is what I want. It’s all I’ve ever wanted.

I only wish my parents could see what this means to me.

What it would mean to hold a dream in my palm, press it tight against my heart, and never let it go.

🎪 Add the book on Goodreads

Are you excited for the release?