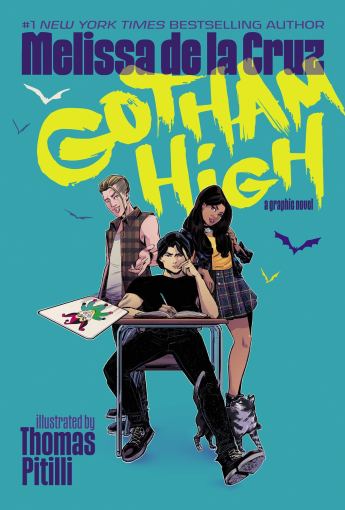 From the #1 New York Times bestselling author of Alex and Eliza and The Witches of East End comes a reimagining of Gotham for a new generation of readers. Before they became Batman, Catwoman, and The Joker, Bruce, Selina, and Jack were highschoolers who would do whatever it took–even destroy the ones they love–to satisfy their own motives.

After being kicked out of his boarding school, 16-year-old Bruce Wayne returns to Gotham City to find that nothing is as he left it. What once was his family home is now an empty husk, lonely but haunted by the memory of his parents’ murder. Selina Kyle, once the innocent girl next door, now rules over Gotham High School with a dangerous flair, aided by the class clown, Jack Napier.

When a kidnapping rattles the school, Bruce seeks answers as the dark and troubled knight–but is he actually the pawn? Nothing is ever as it seems, especially at Gotham High, where the parties and romances are of the highest stakes … and where everyone is a suspect.

With enchanting art by Thomas Pitilli, this new graphic novel is just as intoxicating as it is chilling, in which dearest friends turn into greatest enemies–all within the hallways of Gotham High!

Thank you DC Ink for the gifted review copy in exchange for an honest review!

This was a book with such a great twist!

Ever thought about what it would be like to have Bruce Wayne, Selina Kyle and Jack Napier in high school? well, look no further because this is the graphic novel for you. It was different than the stories we grew up used to especially about the lives of these characters.

There was also the diversity in this which was unexpected but was also a pleasant surprise and definitely made the story a lot different. Bruce Wayne was introduces as half Chinese and so was Alfred who happens to be his uncle in this one. Selina is a Latina while Poison Ivy was Korean. Even Barbara Gordon was featured as an African-American in this one. I honestly found the diversity wonderful. The artwork was amazing! I always end up falling in love with art style in these graphic novels. I’ve been drawn to the style and colors in all the DC Ink novels I’ve read so far and this one was also wonderful. The story was a tad bit predictable but the story was fast and definitely a quick read.

The story is aimed towards a young adult audience so most of the story is around high school life. There was quite a bit of drama involved. There was still a darkish vibe to the whole thing so it did stay true to the DC Universe’s overall theme. I’m really glad that I got the chance to read this! Absolutely loving the DC Ink releases and so looking forward to more of them!

You can read an excerpt here! 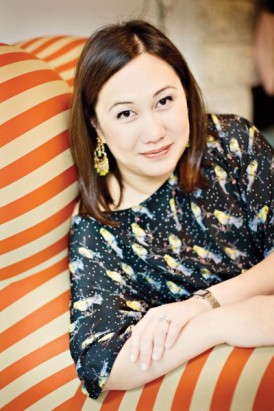 Melissa de la Cruz is the New York Times and USA Today best-selling author of many critically acclaimed and award-winning novels for teens including The Au Pairs series, the Blue Bloods series, the Ashleys series, the Angels on Sunset Boulevard series and the semi-autobiographical novel Fresh off the Boat.

Her books for adults include the novel Cat’s Meow, the anthology Girls Who Like Boys Who Like Boys and the tongue-in-chic handbooks How to Become Famous in Two Weeks or Less and The Fashionista Files: Adventures in Four-inch heels and Faux-Pas.

She has worked as a fashion and beauty editor and has written for many publications including The New York Times, Marie Claire, Harper’s Bazaar, Glamour, Cosmopolitan, Allure, The San Francisco Chronicle, McSweeney’s, Teen Vogue, CosmoGirl! and Seventeen. She has also appeared as an expert on fashion, trends and fame for CNN, E! and FoxNews.

Melissa grew up in Manila and moved to San Francisco with her family, where she graduated high school salutatorian from The Convent of the Sacred Heart. She majored in art history and English at Columbia University (and minored in nightclubs and shopping!).

She now divides her time between New York and Los Angeles, where she lives in the Hollywood Hills with her husband and daughter.

How amazing does this title sound?