“Aren’t we bold now that we believe we are untouchable.”

Where to begin with this review? I saw The Bridge Kingdom on bookstagram quite a few times last year but it somehow came to the front of my mind just a few days ago. This was one of those books that I picked up without having read the synopsis. Something just told me I would enjoy it, so I went for it. I like to surprise myself every once in a while and just pick up a book spontaneously to spice things up, and I am so glad I picked this one!

This book had me hooked from the very first page. Somehow not knowing exactly what the book was about made it ten times better because I had no clue what to expect. Every revelation and moment had me surprised and intrigued. I adored our main character, Lara. There’s nothing I love more than a female character who can kill you at any given moment. Lara was such an interesting character to follow and everything she did from the killing, spying, and gleaning information had me on edge. I was always worried she would get discovered and there were so many moments when I thought, this is it, this is when someone unravels her secret. I just adored her strong personality and everything about her. The deception!

And then we had Aren. This man exceeded expectations. I was expecting him to be nice but he ended up being the sweetest person in existence. There honestly wasn’t a moment where I didn’t like him. He has to be one of my favourite male characters. I loved seeing his relationship with his sister though I do wish there had been a bit more of her in this one. I also loved how he wasn’t arrogant or conceited, not in the beginning or at the end. He was just pure cinnamon roll all around.

“Even if I’m a goddamned fool for it, there will never be anyone but you.”

Now, to the romance. I don’t read much romance unless it’s in fantasy. The romance here was such a slow burn. I’m actually pretty happy that Lara and Aren actually got to know each other before anything happened. It made the romance feel a lot more genuine.

The cliffhanger had me yelling a little. I’m so glad I read it when book two is already out in the world. I think I would have lost it if I had to wait because that ending, that ending was wild. I had so many questions! Definitely will be reading book two very soon. If you’re looking for a strong female character, a soft male lead, and an overall fun story that you won’t be able to put down, I highly recommend this one. 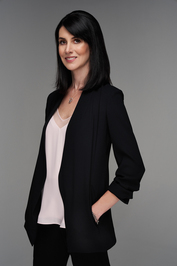 Danielle L. Jensen is the USA Today bestselling author of The Malediction Trilogy (Angry Robot), the Dark Shores series (Tor Teen), and The Bridge Kingdom series (Audible Originals). She lives in Calgary, Alberta with her family.

Have you read The Bridge Kingdom?