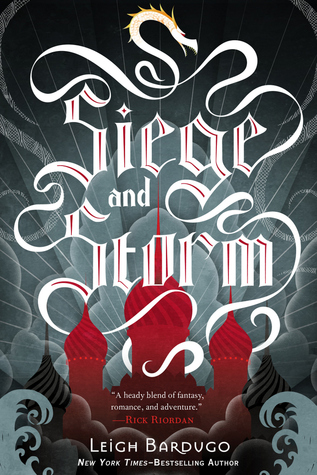 END_OF_DOCUMENT_TOKEN_TO_BE_REPLACED

Surrounded by enemies, the once-great nation of Ravka has been torn in two by the Shadow Fold, a swath of near impenetrable darkness crawling with monsters who feast on human flesh. Now its fate may rest on the shoulders of one lonely refugee.

Alina Starkov has never been good at anything. But when her regiment is attacked on the Fold and her best friend is brutally injured, Alina reveals a dormant power that saves his life—a power that could be the key to setting her war-ravaged country free. Wrenched from everything she knows, Alina is whisked away to the royal court to be trained as a member of the Grisha, the magical elite led by the mysterious Darkling.

Yet nothing in this lavish world is what it seems. With darkness looming and an entire kingdom depending on her untamed power, Alina will have to confront the secrets of the Grisha . . . and the secrets of her heart.

END_OF_DOCUMENT_TOKEN_TO_BE_REPLACED

Okay. how excited are we for the Shadow and Bone series on Netflix? I can’t explain to you how crazy excited I am for this! I had decided that this year I would read all the Grishaverse books and honestly the timing is perfect. I have such high hopes for this adaptation, how excited are you?

END_OF_DOCUMENT_TOKEN_TO_BE_REPLACED

Hello everyone! 💕 What are you all reading this week?
Happy May! 🥰 What's going to be your first read of the month?
What new releases are you looking forward to? Any that you've loved so far?
Who's your favourite Six of Crows/Shadow & Bone character?
What book do you believe deseves more love?
What books intimidate you but you're still hoping to read?
Are any of these on your tbr? What are your favourite books by Black authors?
What books are you hoping to read in April?
What's everyone currently reading? ✨ Here for a little #currentlyreading update. Took a little break this month but I think it's time to get back to A Sky Beyond the Storm 😌👌
Do you enjoy poetry and books written in verse? Any favourites?
What book releases are you excited for this year?
What book do you wish you could experience all over again?
Back to top
Loading Comments...
Comment
×