The Death of Jane Lawrence

Practical, unassuming Jane Shoringfield has done the calculations, and decided that the most secure path forward is this: a husband, in a marriage of convenience, who will allow her to remain independent and occupied with meaningful work. Her first choice, the dashing but reclusive doctor Augustine Lawrence, agrees to her proposal with only one condition: that she must never visit Lindridge Hall, his crumbling family manor outside of town. Yet on their wedding night, an accident strands her at his door in a pitch-black rainstorm, and she finds him changed. Gone is the bold, courageous surgeon, and in his place is a terrified, paranoid man—one who cannot tell reality from nightmare, and fears Jane is an apparition, come to haunt him.

By morning, Augustine is himself again, but Jane knows something is deeply wrong at Lindridge Hall, and with the man she has so hastily bound her safety to. Set in a dark-mirror version of post-war England, Starling crafts a new kind of gothic horror from the bones of the beloved canon. This Crimson Peak-inspired story assembles, then upends, every expectation set in place by Shirley Jackson and Rebecca, and will leave readers shaken, desperate to begin again as soon as they are finished.

Thank you St. Martin’s Press for the gifted review copy!

I didn’t really have many expectations when I started the book. I didn’t know what to expect but I was ready to give the book all my time. I wanted to be creeped out, and honestly, this book delivered that and more. This is my first book by Caitlin Starling and her writing was wonderful. Had me sucked in from the first chapter. Everything about this book was mesmerising in the strangest way.

Lindridge Hall had me in its thrall. Throughout the entire book, I was waiting for our main character to discover more about the house but at the same time, I was scared and worried about what we would find out. I wanted our main characters to leave but I also wanted them to stay, which is a weird thing to think if I’m being honest. The way the author described the setting and the things that were being seen really gave me the chills. It was so hard to put the book down because I wanted to keep discovering the secrets of the house, and what would happen to our characters.

Our main character, Jane was an absolute delight. I loved how her mind worked. She was smart and strong, and even with everything that she had to go through and the new realities she had to face, she was determined through it all. She had some breakdowns (which were expected) but she pushed through it all. She felt realistic because of it. I went through a few emotions when it came to Augustine. I don’t want to give too much so as not to ruin it but I did adore Augustine by the end of this book.

It’s true that I didn’t know what to expect from this book but the ending still pretty much shocked me. I’m still a little confused about what happened but this book was everything I had hoped it would be. It delivered on the creepy and mysterious. Definitely gave me Ninth House vibes! 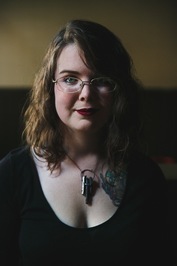 Caitlin Starling is an award-winning writer of horror-tinged speculative fiction. Her first novel, The Luminous Dead, won the LOHF Best Debut award, and was nominated for several others. She tweets at @see_starling and has been paid to design body parts. You can find links to her work at www.caitlinstarling.com.

Will you be reading The Death of Jane Lawrence?